Despite completing deals to expand their supply lines in Northern Europe and North America, major Asian trading giants such as Maruha Nichiro or Nippon Suisan Kaisha are unlikely to take any interest — at least for the immediate future — in buying wild catch enterprises in Spain and Latin America, top financial advisors told Undercurrent News.

Speaking on Undercurrent’s “What COVID-19 Means for Seafood M&A” webinar on June 4, Jose Antonio Zarzalejos — a partner with banking house “It’s not a coincidence that Nomura had the sales side mandate for Iberconsa. They were very clear they wanted to attract interest from Asian buyers, but that didn’t happen.”

“The issues that you have with Asian buyers in many cases are due to scale and often a lack of management capability,” he told Undercurrent. “Even though they are good traders and they purchase products from around the world, they do not [usually] have the management capability expertise for cross-border [deals], to go and take over a major fishing operation overseas.”

END_OF_DOCUMENT_TOKEN_TO_BE_REPLACED

The COVID-19 pandemic is likely to drive more salmon farmers to look at buying into processing to secure access to their target markets, said financial advisors from Pareto Securities and Antarctica Advisors.

Speaking on Undercurrent News’ “What COVID-19 Means for Seafood M&A” webinar (watch in full below) on June 4, Henning Lund, a senior partner at the Norwegian advisory  rm Pareto, said upstream consolidation of the salmon sector would likely continue as before, with “new regulations and generation shifts more likely to impact the sector than the pandemic”.

END_OF_DOCUMENT_TOKEN_TO_BE_REPLACED

More diversified global seafood players like Cooke are needed to bring stability to the industry, said a senior mergers and acquisitions (M&A) advisor during an Undercurrent News webinar on the impact of the coronavirus pandemic on deals.

Ignacio Kleiman, whose Antarctica Advisors is the most prolific M&A advisory firm according to Undercurrent’s latest Seafood Dealmakers 2020 report, said more players like Cooke would make the sector more robust in riding out global crises.

END_OF_DOCUMENT_TOKEN_TO_BE_REPLACED 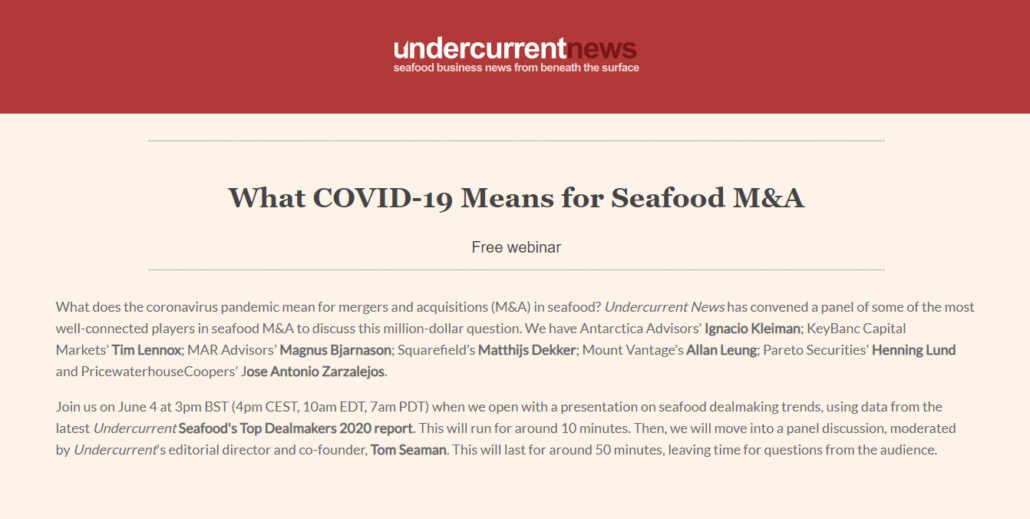 The owner of major Argentinian shrimp supplier Continental Armadores de Pesca (Conarpesa) is looking to sell the company, he con rmed to Undercurrent News.

Fernando Alvarez, Conarpesa’s owner and president, said that the company, which generates around $165 million in annual sales, is in talks with potential buyers to sell the major shrimp harvester at a “reasonable price”.

“A year ago, there were rumors that we [Conarpesa] were searching for investors to sell the group. At that time, Antarctica Advisors was doing a study on our company,” he said, adding that the search continues despite the COVID-19 pandemic. “Currently, we are still negotiating and looking for an investor who can ensure business continuity. This may not be the best time to do so, but we have been evaluating this option for a year now,” he said.

END_OF_DOCUMENT_TOKEN_TO_BE_REPLACED

Antarctica Advisors, one of the most prolific seafood corporate finance advisory firms, has been brought in to work with RBC Capital Markets on adding more international players to the sale process for Clearwater Seafoods, sources told Undercurrent News.

RBC is leading the Clearwater sale, which was announced on March 5, with Antarctica acting as co-advisor, Clearwater’s Christine Penney confirmed to Undercurrent. The revelation Florida, US-based Antarctica will also work on the sale of Clearwater — being valued by analysts at between CAD 880 million to CAD 1.2 billion ($641m to $847m) — comes as two big Asian players, Legend Holdings of China and Mitsibushi Corp. of Japan, ruled out bids to Undercurrent.

END_OF_DOCUMENT_TOKEN_TO_BE_REPLACED

The second-largest rainbow trout farmer in the US, owned by the creator of a multitude of hit TV shows, has a deal for its larger rival, Clear Springs Foods, making it, by far it the largest farmer of the species in the country.

The purchase by Riverence Holdings, the parent company of Idaho’s Riverence Farms, means that the combined vertically integrated farmer will include 14 farms with a total capacity of 15,000 metric tons annually, four brood stations, two processing facilities, a value-added processing arm, waste recovery plant and a feed mill, the company said.

END_OF_DOCUMENT_TOKEN_TO_BE_REPLACED

The company, backed by a Hollywood TV mogul, now has its sights on re-inventing the US trout market.

With the Clear Springs deal, the company’s operations now include Riverence Brood in Washington State and Riverence Farms, and gives it an even stronger position as a vertically-integrated producer.

END_OF_DOCUMENT_TOKEN_TO_BE_REPLACED 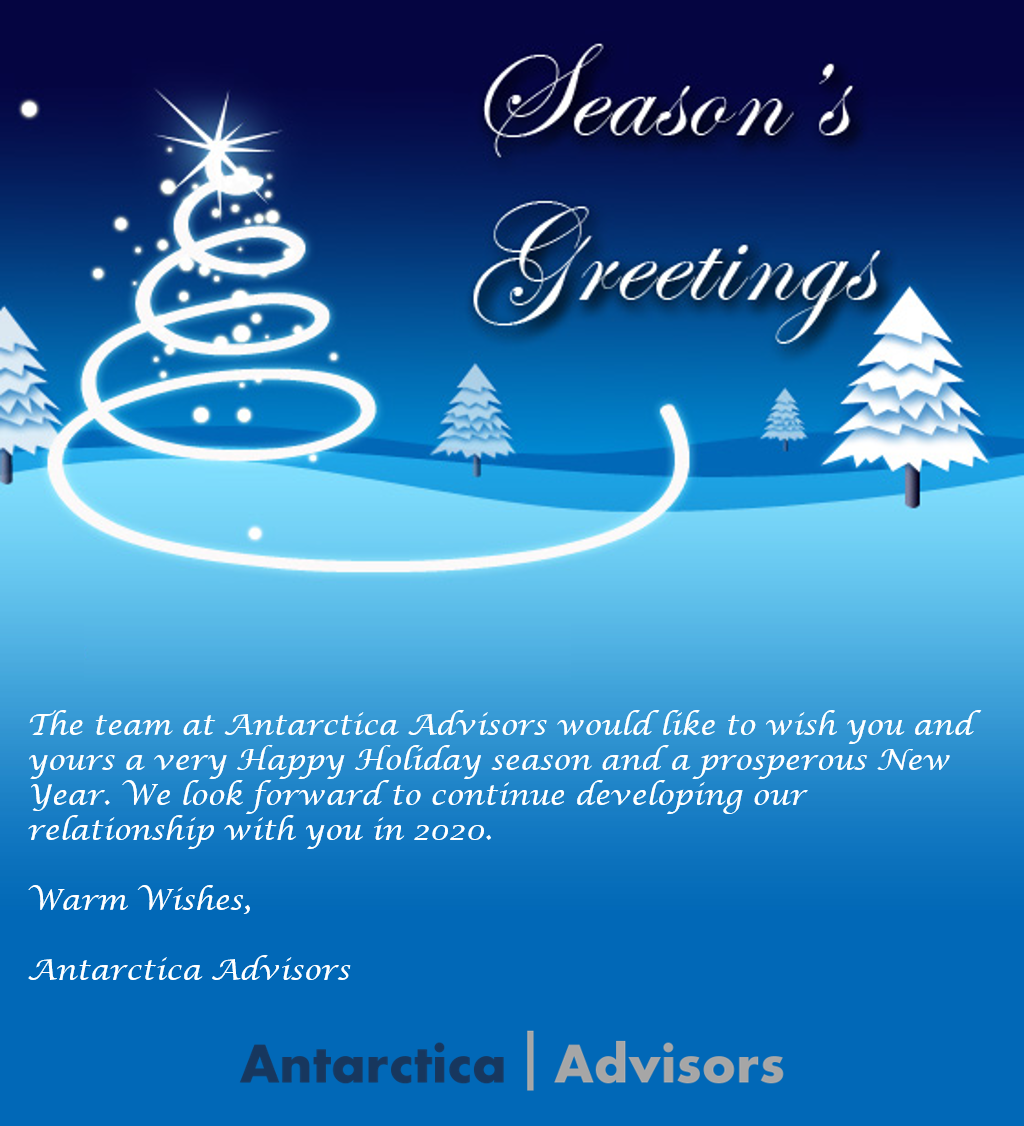 Spain’s Profand Fishing Holding has moved to acquire Spanish retail group Mercadona’s processing firm Caladero, after buying Stavis Seafoods and investing in Seafreeze in the US.

Zaragoza, Spain-based Caladero will add a new range of species Profand’s portfolio. Caladero processes salmon, trout, seabream and seabass, as well as sardines, in addition to octopus, squid and shrimp Profand is known for.

Vigo, Spain-based Profand agreed to buy 100% of Caladero, which specializes in products in modified atmosphere packaging MAP) trays for Mercadona, which took control of the plant in 2010 after it ran into difficulties under Carlos Amoros, its former owner. The plan at the time was to eventually find an industry buyer such as Profand, which is the main supplier of cephalopods to the retailer.

The deal, which is pending approval by the Spanish competition authority, will allow Profand to “boost its growth and consolidate its leadership in Spain in both volume and efficiency and productivity”, the company said.

The MAP-focused Caladero plant in Zaragoza has 55,000 square meters of production area with a capacity total of 21,000 metric tons of product per year, employing some 600 staff.

Caladero will add €200 million ($222.50m) and a net profit of €3.4m to Profand’s growing business. When Undercurrent News revealed Profand’s move for Seafreeze, done in partnership with Michael Tourkistas, the founder of US shellfish processor East Coast Seafood Group, it emerged the deal would take the company past $500m. So, the addition of Caladero will make the wider Profand group to around $720m in annual sales.

“This is a strategically important transaction both for Profand and for the Spanish seafood industry as a whole. The sector was deeply affected by the 2008/09 financial crisis and this transaction is recognition of the fabulous recovery the sector experienced,” Ignacio Kleiman, founding partner of Antarctica Advisors, told Undercurrent News.

END_OF_DOCUMENT_TOKEN_TO_BE_REPLACED

Antarctica Advisors, the leading Seafood Industry-focused investment banking firm, acted as the exclusive financial advisor to Clear Springs Foods, Inc. in its 100% sale to Riverence Holding LLC.  The combined group is the largest producer of trout in the U.S., becoming one of the largest aquaculture companies in the country.

Antarctica’s specialized Seafood Team worked with the Board and Management in finding the best strategy for the Company, advised in the Company’s refinancing prior to the sale, and led a closed competitive sales process geared towards maximizing value for the Company’s employee-owners.

You are being redirect to the Antarctica Advisors LLC website